by vvr-auteur-1 in Commercial development

Last week, temperatures went up to 35° in Shanghai and Guangzhou, and reached 40° in Beijing… Summer and its dog days are back in China! For more and more Chinese, it is time to enjoy a cool beer, beer that comes as a huge opportunity for European breweries: imported beers are increasingly popular among Chinese consumers, and 75% of these beers are European. This month, we will then explore the characteristics of this expanding market where European companies enjoy such a reputation’s advantage.

The first worldwide market for beers

Twice the size of the American market, five times that of Germany (the biggest consumers of beers in Europe), the Chinese beer market reached 45,7 billion liters in 2017. Beer is the first alcoholic beverage consumed by Chinese (in terms of volume), making up 75% of the whole consumption (below figure). This market has been growing fast over the last years and is now in maturation: volumes decrease but the value remains at the same level. In other words, there is a premiumization of the beer market in China. This trend is all the more advantageous for European breweries as their products are premium on the Chinese market (high quality beers). 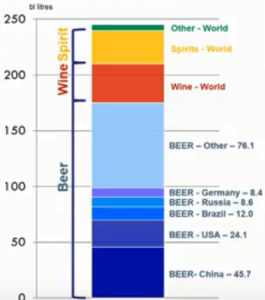 The millenials seeking for premium products

The reason for this phenomenon lies within the profile of the Chinese consumers, and the market segmentation induced. Like many consumer goods, the millennials are the driving consuming force today in China: young, urban, with increasing incomes and a sharp eye for the quality and services offered by brands (cf VVR’s June article). In the beer market, which can be divided in three sub-sections: mass consumed beers, leisure beers and craft beers (EU SME Centre classification), these young consumers are increasingly turning to leisure beers and craft beers, which happen to be both mostly imported beers.

The largest subsector, mass consumed beers are today declining in sales (a 3% decrease over the last three years).  Most of these beers are domestically produced. They have a low alcohol rate (3%) and are very cheap (1euro per liter). They are consumed by all type of consumers, mainly to go with Chinese-style dinner.

The European beers are leisure beers. They are mainly consumed in first and second-tier cities

European beers are mostly part of the second subsector: the leisure beers. These leisure beers are mostly sold in bottles (330ml, 500ml, using original packaging, rarely available on kegs). Almost all of them are from foreign brands, produced either abroad or in China. In all cases, their price is much higher than the mass consumed beers’ one: 13 euros per liter in bars. Thus, they are consumed by urban high-income Chinese, in bars or at home, alone or with snacks. While this type of beer is mostly found in first and second tiers cities, the fast adoption of e-commerce by Chinese consumers rends sales available in the rest of China possible as well. No specific type of beer, nor specific brands are dominating this market. In fact, it is rather characterized by a strong diversity in the offer, in terms of tastes and brands. Chinese consumers seem to be liken this diversity and show interest for… innovation.

This market is expanding fast (38% growth rate in 2017) and is therefore a huge opportunity for European breweries whose products correspond to the demand. Thus, more and more of them are entering China now, and the volume of importations has had a double-digit growth for the last 5 years. All in all, in ten years, importations were multiplied by 22. Particularly successful countries are Germany, United States, Belgium, the Netherlands and Portugal, the 5 largest exporters of beers to China in 2017. No less than 13 European countries are also among the 20 largest exporters.

The last category is craft beer. Either locally produced or imported (in the latter case, they shall be counted as part of the importations figures mentioned above), these beers are very expensive (13,4euros the liter in bars). Craft beers are commonly consumed alone or to go with Western-style meals, by young, urban consumers with high-income. It was almost impossible to find any craft beers 10 years ago. Because of their relative newness, we mostly find them in first tier cities, and they develop fast in second tier cities. Like for the leisure beers, there is no preference for a type of beer neither even if blondes do get the upper hand. Meanwhile, the number of actors on this market is by contrast very restrained, with only a few foreign breweries. This is explained by the Chinese regulation which only allows for breweries with big production capacity. Thus, microbreweries can only either outsource part of their production, or sell their beer to an actor already present on the market, such as AB InBev who is largely dominating the market.

When it comes to leisure beers, regulations do not seem to be a major obstacle for importation. Like any food and beverage, one need to satisfy the customs (CIQ), the food safety regulations, as well as the regulations on labelling of pre-packaged food (2011) and pre-packaged alcoholic drinks (2005).

Because there is no need for changing one’s packaging, the cost of entry for leisure beers stands relatively low compared to the high potential profit this market can yield today. European business should enjoy this golden opportunity given on them by the reputation of European beers among the Chinese millennials. Yet, one should bear in mind the high level of competition that is characteristic of the Chinese market for any consumer good: to stand out of the crowd, it is thus important to have a quality product, and a solid marketing strategy. The Anufood China, an exhibition on Food and Beverages is happening next November in Beijing. It might be an interesting first step, in order to investigate one’s potential competitors as well as potential partners, two must-do when one prepares their entry on the Chinese market.

SPOTLIGHT ON THE “TAOBAO VILLAGES”

Taobao : It is Alibaba’s e-commerce platform, launched back in 2003. This C2C platform gathers today over 500 millions of active users. Besides, they also developed a B2C platform in 2008 called T-Mall. These two platforms saw the transaction of some 3 trillion yuans over the year 2017. It is very likely that a large part...

HOW CAN A COMPANY ADAPT TO THE NEW CONSUMPTION HABITS IN CHINA?

Two stories about tea and dairy products The conclusions of the governmental report that was released in May at the E-commerce Convention in Beijing came as no surprise: e-commerce transactions grew by 11,7% in 2017. Several facts were as well underlined in this report: the outstanding development of the cross-border e-commerce (+120% in cross-border imports),...